An unforgettable 2021 TotalEnergies 24 Hours of Spa has been won by Ferrari after a faultless showing from Iron Lynx gave the Italian marque its first triumph in the Ardennes since 2004, ending more than a decade of German dominance.

The #51 car was consistently the fastest on-track in wet and dry conditions whether it was Alessandro Pier Guidi, Côme Ledogar or Nicklas Nielsen behind the wheel. Starting from 13th on the 58-car grid, it was running second by the fourth hour and hit the front in time to bag maximum Fanatec GT World Challenge Europe Powered by AWS Endurance Cup points at the race's one-quarter mark.

The Italian squad was pegged back shortly before midnight when it was handed a refuelling infringement penalty but remained firmly in the hunt. Pier Guidi was the star of a stellar night shift, which ensured that the Ferrari was leading once again at half-distance, adding another 12 points to its Endurance Cup tally.

As the sun rose over the circuit to signal the final push towards the chequered flag the #32 Audi Sport Team WRT car had emerged as the most serious challenger to the Ferrari. Starting from 54th after a disastrous qualifying, the crew of Dries Vanthoor, Charles Weerts and Kelvin van der Line produced a memorable comeback. By 09:00 on Sunday morning it was running second, though by this stage the leading Ferrari was 40 seconds clear at the head of the field.

It was not until the final four hours that the battle for victory burst into life. It was at this stage that Nielsen came upon heavy traffic at Blanchimont, giving Van der Linde an opportunity to pass at the Bus Stop. The Audi driver dived up the outside and briefly had his nose in front, albeit with an armful of opposite lock and the barriers rapidly approaching.

The race was building towards a grandstand finish. At the penultimate round of pit stops Pier Guidi climbed aboard the Ferrari, while Vanthoor was installed in the Audi. In a battle between two of GT racing's elite drivers it was the Italian who emerged on top, pulling away throughout the 23rd hour to lead by more than 20 seconds when he stopped for the final time and took slick Pirelli tyres.

When Vanthoor stopped one lap later there seemed to be nothing that Audi Sport Team WRT could do to get their driver in front, but the Belgian team had a final hand to play. Though the track remained dry, wet weather tyres were fitted to the #32. It was an inspired choice: the heavens opened just as Vanthoor was re-joining the circuit at the top of Raidillon, handing the Audi driver a huge advantage.

Pier Guidi tried to hang on with slicks, but as the rain intensified he did well to simply keep the car pointing in the right direction. Iron Lynx had no option but to bring their driver in for another stop and surrender the lead to Audi Sport Team WRT. Meanwhile, the #33 Rinaldi Racing Ferrari hit the barriers on the Kemmel Straight, requiring the intervention of the safety car.

Once the pack was bunched up Vanthoor had five lapped cars between himself and the Iron Lynx Ferrari with just under half an hour remaining.  It looked like an almost impossible task, but Pier Guidi gave himself a fighting chance by clearing the traffic in two laps. The hunter had become the hunted.

It was soon evident that the Ferrari was far more comfortable in wet conditions, with Pier Guidi visibly quicker through Raidillon. He took just a few laps to reel in Vanthoor and had his first chance at an overtake into Les Combes with 10 minutes left on the clock. The Audi driver held firm, but Pier Guidi got another run just a few corners later.

At high speed and on a drenched circuit, the Italian dared to go around the outside of Vanthoor at Blanchimont. In a move that will be replayed for years to come, Pier Guidi powered past and into the lead of the race. Vanthoor had no reply. A few laps later, the #51 Iron Lynx machine crossed the line to take Ferrari's first TotalEnergies 24 Hours of Spa win since 2004 and the first for a non-German marque during the GT3 era.

Behind the leading duo the #95 Garage 59 Aston Martin completed the overall podium and was the only other car on the lead lap. The crew of Nicki Thiim, Marco Sorensen and Ross Gunn were quietly excellent, rarely attracting attention but running a fast and error-free race to take Aston Martin's first overall podium since 2008.

Madpanda Motorsport took Silver Cup honours with its #90 Mercedes-AMG, giving Ezequiel Perez Companc's young team its biggest success yet. Considered an outside contender before the race, the car took advantage of an early shower to move to the lead by two hours and remained at the head of the class thereafter.

It was rarely a long way clear, however, particularly after a drive-through penalty for track limits allowed the #159 Garage 59 Aston Martin to close in. But the crew of Perez Companc, Rik Breukers, Patrick Kujala and Ricardo Sanchez had the pace to pull away when it was needed the most and kept their cool during the final downpour to claim a popular class win. Toksport WRT took runner-up to ensure a Mercedes-AMG one-two, while Garage 59 was third at the chequered flag.

AF Corse added further silverware to the Ferrari haul by securing a one-two finish in Pro-Am, its fifth victory in the class and the first since 2015. The #53 line-up of Duncan Cameron, Matt Griffin, Rino Mastronardi and Miguel Molina came out on top against the sister #52, establishing a comfortable advantage during the final third of the race. This was a vintage year for the 488 GT3, which also finished fourth thanks to Sky Tempesta Racing. The only interloper was the #77 Barwell Motorsport Lamborghini, which completed the class podium in third.

The Hägeli by T2 Racing claimed victory in the all-Porsche battle for Am Cup honours. It was involved in a close battle with the #23 Huber Motorsport car, which had edged in front by the morning hours only to suffer a heavy crash at Raidillon. At the same time the Hägeli by T2 Racing entry was wheeled into the garage, but the team was able to re-join the race and clinch victory with Pieder Decurtins, Manuel Lauck, Marc Basseng and Dennis Busch.

As ever, there were hard-luck stories. The #63 Lamborghini looked strong during the night hours but lost a lap after receiving two drive-through penalties for speeding in the pit lane. It had fought back to fourth spot, only to be hit with another drive-through for tipping the #93 Ferrari into a spin before a puncture with two hours remaining cost it even more time.

The Mercedes-AMG challenge faltered in the early morning when the factory-supported #88 AKKA ASP entry was forced to retire with a broken left-rear damper. After starting from pole the car had remained a leading contender for the majority of the race and was running third, behind the eventual top-two finishers, when disaster struck.

Nor was luck on the side of the four crews that were eliminated within 22 minutes of the start. Thankfully, however, all of the drivers involved escaped without serious injury, a testament to the dedicated work of emergency staff at the circuit and the incredible safety standards of modern GT3 cars.

Ultimately, the 2021 edition should come to be remembered as a classic. The arrival of intense rain during the final hour and the incredible battle for victory that followed could not have been scripted better, while Audi Sport Team WRT's tyre choice was a masterful piece of strategy. In the end, however, it was impossible to outthink Pier Guidi's pace during the closing minutes. His pass at Blanchimont was thoroughly worthy of victory in the biggest race on the calendar. 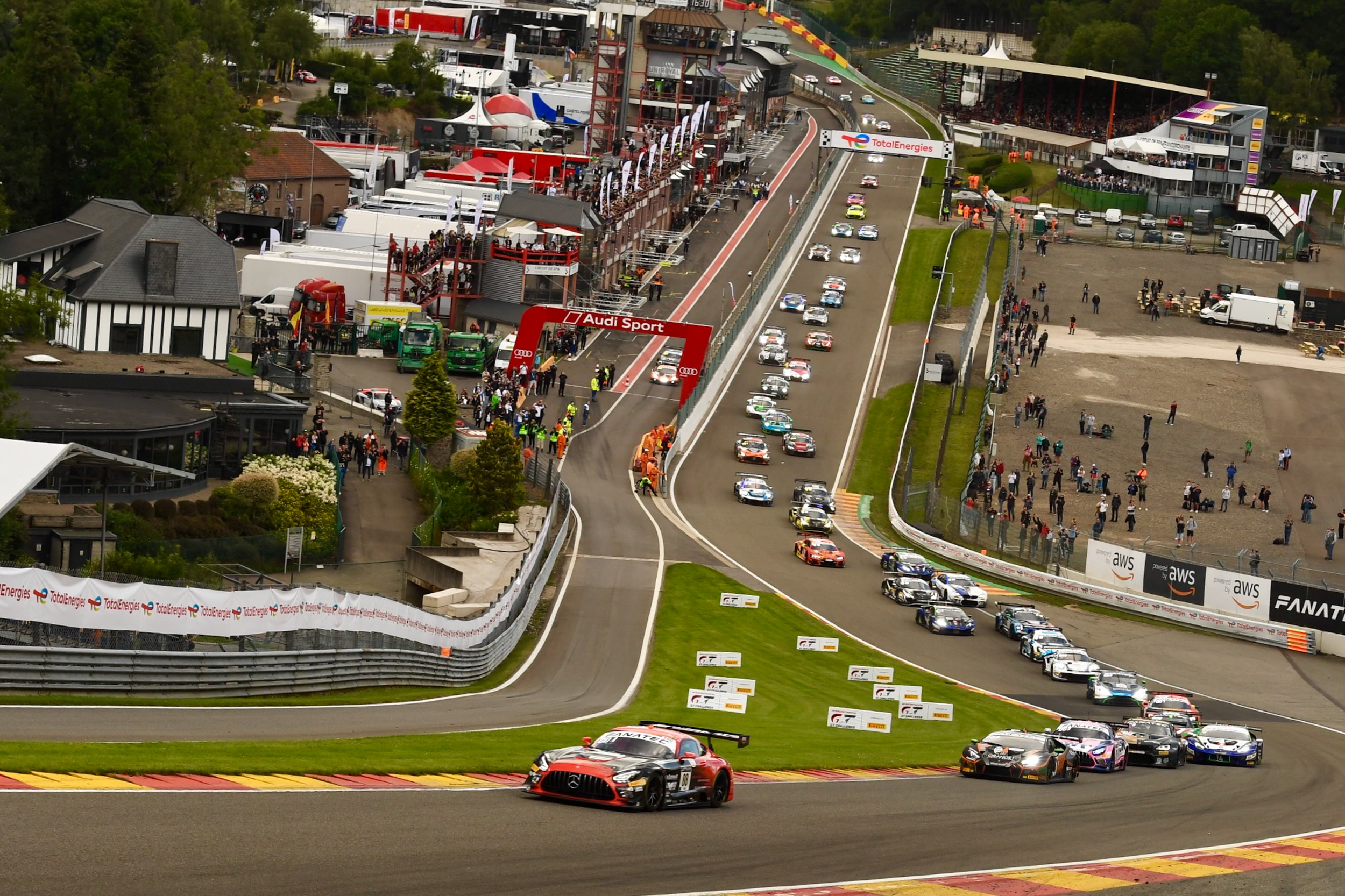 Alessandro Pier Guidi, #51 Iron Lynx Ferrari: “I have tried many times to win this race, and after two second places overall and two wins in the Pro-Am Cup, I am very happy to take this overall victory. We led the race for most of the time, but in the last half hour everything looked lost. After the restart I decided to give everything – I had no choice. Maybe it was not the easiest overtake on Dries, but he made a small mistake exiting Stavelot and I managed to get alongside. I don’t know why, but I felt I had to go for it and it worked. This is an incredible feeling and it will take a bit of time to understand what we did.”

Dries Vanthoor, #32 Audi Sport Team WRT: “Before my last pit stop I reported there was a large dark cloud coming towards the circuit, and the team immediately decided to go for wets. That was a very good call. But when the lights went to green, I immediately felt that I did not have all the grip that I would have liked. I was not surprised when the team told me the Ferrari was catching me. I tried everything I could, but when he got alongside I tried to play it fair and we did not touch. They were quick anyway, both in the dry and the wet.”

Ezequiel Perez Companc, #90 Madpanda Motorsport Mercedes-AMG: “I had fun all week! This is the main aim of Madpanda: we are a ‘pandemic’ team and we try to bring joy to people who are having a hard time. We worked really hard for this result, and since we are new there were not many people that believed in us. I am really proud now, and would like to thank every member of the team.”

Duncan Cameron, #53 AF Corse Ferrari: “What a nailbiter! I was in my RV when I heard the rain come down on the roof and I was glad I wasn’t in the car! We had a great strategy and the whole team did a perfect job. Amazing.”

Manuel Lauck, #166 Hägeli by T2 Racing Porsche: “This team was only created at the beginning of the year, and of course we lacked some experience. We lost one hour because we had to repair the steering rack, but when we saw the other Porsche had crashed we were determined to finish the race. In the end we won, and I’m quite happy with that.”